My journey to becoming a Virtual Assistant 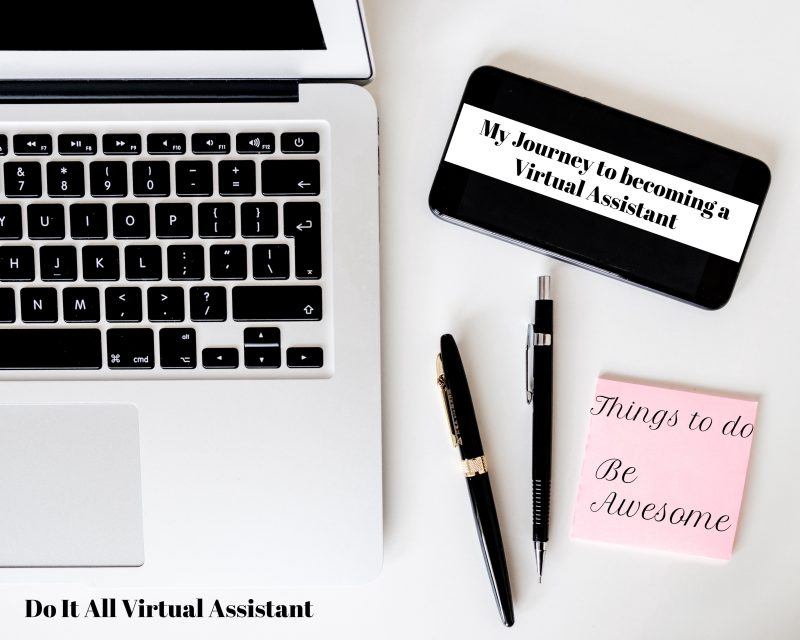 It was a warm day, back in August 2016. The breeze was blowing the branches on the oak tree outside of my office window. I was tired after spending almost two hours in my car commuting to work in the city and starting to get hungry. I opened my wallet to see how much money I had to spend on lunch, and a moth flew out. Empty.

I’m just kidding. I never carry cash so my wallet is purely decoration. It was August 2016, and I was at my day-job. I’m in Texas so I’m pretty sure it was really warm. I had been working part-time as a mystery shopper and merchandiser, and that was getting old. Money was tight even with two jobs.

I needed to find a way to help supplement my income while staying at home. Since I was commuting so far to work at that time, the last thing I wanted to do was spend more time in my car. I missed my house. I love my house. And my kids, of course! I love them the most!

I started doing a little research on ways to make money working from home, and I stumbled on UpWork. I wasn’t sure if it was legit, but it seemed tons of people were using it so I thought I’d give it a try. Shortly after I created my new profile, I began sending out proposals to available jobs that I knew I could do.

What was I qualified to do?

I had working experience as an Administrative Assistant, but I had never worked virtually before. I wasn’t familiar with many of the programs people were using such as Trello, Teamwork, Asana, Desk, and more. I knew I’d have to start at the bottom.

I found an ad for someone needing help with their expenses submitted through Concur. Light bulb! I was using Concur at my day-job so I knew I could handle it. I emailed the poster, and I was hired.

I located another ad wanting someone in the Houston area to send them screenshots of what was on sale at a local Hispanic market each week when their commercial aired on Tuesday mornings. I got local channels at that time, and that sounded almost too easy to be true. It was easy, and it was true. I was paid weekly to record a specific show on Tuesday mornings. When I got home, I fast forwarded until I found the commercial. I took a pic of the two sale items featured for the week and emailed them to my client. $15 a week for something that took literally 2 minutes.

I did several more of these smaller jobs before I landed a gig working 10 hours a week! I worked roughly 1.5 hours Monday through Friday and then about an hour or so on Saturdays and Sundays answering emails for a company selling on Amazon. I ran their Twitter account. I also managed their product reviewers.

During that time, I still continued working smaller jobs, and I was fortunate to work with many people who took the time to train me to use programs specific to the jobs they needed done.

My main gig at that time ended when my client sold his company, and the new owner outsourced staff from the Philippines. Ouch!

When one door closes, another opens. I eventually started working with two of my current clients in 2017. These jobs were meant for me! Everything about them was perfect. Working for them made me feel that this is what I had been working up to.

I was working about 20 hours a week part-time at night and on the weekends. I was a probation officer by day at that point so while my commute wasn’t as bad as it was before, I was still commuting to work. I still felt like I wasn’t seeing my kids much, and I was always on the road.

I was struggling with wanting to do more to help grow my own business as a virtual assistant or staying at a job where I knew it was a stable, secure position.

After reflecting for weeks, praying for guidance and getting into a car wreck leaving me driving my old van with no air conditioner, I decided to take a leap of faith.

One weekend, both of the people I was working for asked me to take on more hours. Together, I would have a 40-hour work week. Talk about timing! I turned in my two week resignation to probation, and Do It All Virtual Assistant was born!

I started at the bottom, and I was clueless to the ways of the virtual world. However, having an open mind and remaining diligent has catapulted me into one of the top-rated VA’s on Upwork. To this day, I have people viewing my profile and sending me invites to interview with them. I always take the time at the end of the day to politely decline.

I’m one person so there’s only so much I can do. In the near future, I hope to take on more clients and outsource to a team of my own to help with the work. That plan is actually in the works now, but I’ll get more into that later.

The sky’s the limit, right?

>>Why hire a Virtual Assistant

Has one comment to “My journey to becoming a Virtual Assistant”

You can leave a reply or Trackback this post.

Any cookies that may not be particularly necessary for the website to function and is used specifically to collect user personal data via analytics, ads, other embedded contents are termed as non-necessary cookies. It is mandatory to procure user consent prior to running these cookies on your website.